This week I publish just one of Albert’s letters, written on a Sunday afternoon atop the highest hill in Hampshire. Take away the date and this could have been written at any time in the twentieth century; there is no flavour of war here. Indeed should you be a reader hungry for history regarding the RAF in World War Two, then I’m afraid there is little for you here. If, like many of my regular readers, you seek the common threads of humanity in the words of those long passed, then I invite you to read on.

Dear All, I am looking down towards Hampshire from the South side of Inkpen Beacon. The best view and what a marvellous view it is, is looking north to Berks. & Wiltshire, but it is too windy to write letters there. On this side there is just enough breeze to prevent the sun from being uncomfortably hot. Even from here it is very nice looking down the road to Combe which you will see is walled in on three sides by the downs. For a good description of the village and surrounding country see “Afoot in England”. As a matter of fact it was reading that book which made me visit the place today & it certainly is worthwhile.

“The top is a league-long tableland, with stretches of green elastic turf, thickets of furze and bramble, and clumps of ancient noble beeches—a beautiful lonely wilderness with rabbits and birds for only inhabitants. From the highest point where a famous gibbet stands for ever a thousand feet above the sea and where there is a dew-pond, the highest in England, which has never dried up although a large flock of sheep drink in it every summer day, one looks down into an immense hollow, a Devil’s Punch Bowl very many times magnified,—and spies, far away and far below, a few lonely houses half hidden by trees at the bottom. This is the romantic village of Coombe…. that small isolated village in its green basin—a human heart in a chalk hill, almost the highest in England.”

I came to Hungerford on the main London road. Although it is such a busy road, there was not much traffic today after I had passed by ‘an army convoy’ before & just after Marlborough. I started from camp at 10am, and so avoided what few joyriding motorists remain. In Marlborough I saw a good example of how the British Army carries out manoeuvres; coming down on the London road I encountered one of the light trucks leading some heavy lorries up a side road. As they came to a turning the driver put his hand out to the right, and an officer standing up behind him promptly put out his hand to the left. Apparently they didn’t know which was the right road, though there were three sorts of police fellows about and about 2 one inch maps to each car.

Along the A4 between Marlborough and Froxfield I saw what seemed to be Berberis growing and blooming by the roadside. Froxfield is quite a nice little village by the Kennet. It has some rather nice looking alms houses, called Somerset Hospital. Just a minute & I will see what “Highways & Byways” has to say about them – apparently they were built in 1691 and enlarged in 1775 “by the right noble Sarah Duchess Dowager of Somerset deceased.”

In a farmyard at Froxfield I saw an old stage coach in a very dilapidated condition. Just out of the village is the Berkshire border and from there it is not very far to Hungerford, where I left the main road. I went through a lovely common just out of Hungerford, and took the quickest road to Inkpen, which is quite a small village, some distance away from its church, which I did not visit.

Though I took it to Calne on Thursday, my 3-speed was not yet ready yesterday, so I have been running with more or less fixed gears. Just before reaching Inkpen though, I fixed the gear in middle, by means of a piece of wire & the chain I usually lock it up with. I need a lower gear than top in this part of the journey.

I reached the hill here at about 12.30, and before writing this I ate half the date cake. I took that as I thought that of all the eatables, it would travel best. Incidentally it is a very nice one. If I can find a piece of string I will now measure my mileage up to date: if I am to believe my cyclometer it will be about 25. And not very far out either, it is actually about 23. I see from the map that I was wrong in saying that Froxfield was by the Kennet; that river does not run close to the main road again until Hungerford.

I have seen quite a lot of Kerria today, as well as wild cherry blossom and all the usual spring flowers. I saw some wild bluebells on Thursday. At the moment I can also hear a cuckoo in the woods below.

On Thursday, after I had taken my 3-speed in to be repaired (by Friday he told me) I went out of the village north-westwards, on a little road between A4 and B3102. After about two miles I turned right and went along a road which overlooks the plain of the Avon. Though the road was never more than about 410 feet high, the view was pretty extensive and as the sun was coming through the fresh green foliage, from the west, it all looked very lovely. As I only decided in Calne to go for the ride, I had not my map with me, but by various little lanes I managed to find my way to Compton Bassett, crossing the B3102 just north of Hilmarton, and keeping south and west of Highway. Compton Bassett is a very long village, which straggles along the lane for a distance of about a mile. I suppose I should not say “straggles”, as it is one of the neatest & best kept villages I have come across. Most of the cottages are whitewashed or cream washed and have tiled or smartly thatched roofs and well tended gardens, many of which are terraced up the hillside. The church I did not visit, as it was too late in the evening, but it is a Perpendicular building which looks very good from the outside.

Between Compton B. and the main road is an RAF camp which takes its name from the village. Its situation at least is much better than ours as regards immediate surroundings, and it is doubtless neither so cold or so windy.

By the way, the parcel arrived quite safely on Saturday by the second post: they seem to be a bit slower in transit of late.

Excepting that I must try to see Mr Bryan one night, and that I must go to Calne tomorrow & get my 3-speed wire (I hope) and a card for aunt Daisy, I think there is little to say in reply to your letter, so as it is getting a bit uncomfortable here, and also it is 10 past 2 and time to push on, I will be closing now.

I will post this in Combe or perhaps somewhere in Hampshire. I suppose it will not be much use sending love to Auntie Edie as she will have gone before the letter arrives, so love to all at home, from Albert.

P.S. Remember me to Mrs Churchill. I see that I have forgotten to bring the right envelopes, so excuse the one I have used, and the way the paper is folded.

In the course of this endeavour of mine, which has mostly centred around Albert’s letters (as they far outnumber those of my other Mabey relatives) I have gained a great deal; not just insights into times gone by but also an exploration of hidden memories of my own. In this letter Albert invites me to remember the Kerria that grew in the front garden of my childhood home, rather too ‘straggling’ for my Mother’s liking. Albert casts my mind back to the tall bookcase in the living room filled with faded linen covers, “Highways and Byways”, “English Downland” that I ran my fingers across on drowsy afternoons. He calls to mind the singing grasslands and dusty chalk paths we tramped along, with Mum and Dad ahead of us, four girls lost in our daydreams. Albert, dear and gentle soul, invites me to memories that are distant and sweet. 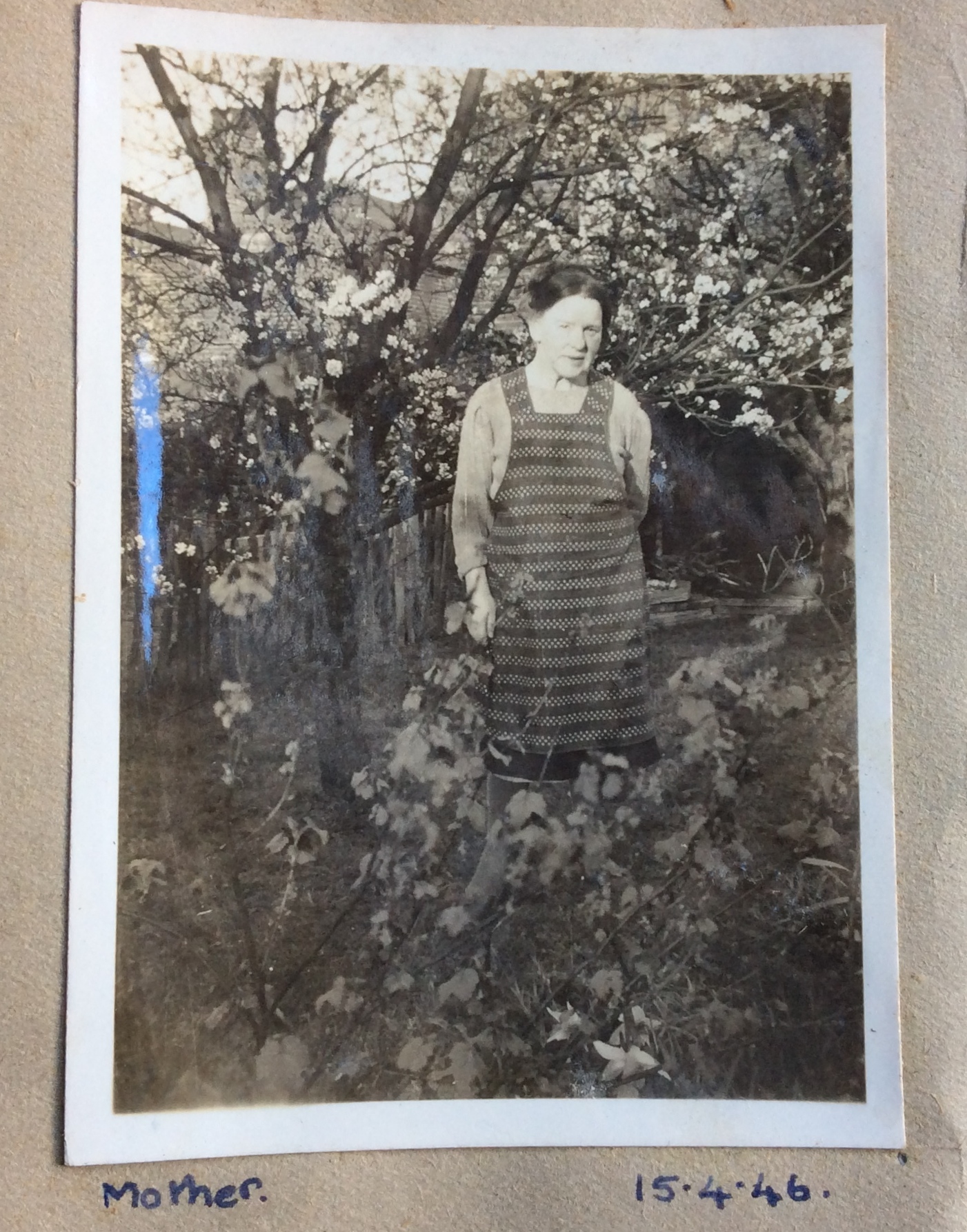 There are no memories of my Grandmother; all my life an absence of recollection. In those two years before her death in 1965 I know she would have held me, countless times. I know she must have murmured over my tiny form, held my steady, infant gaze, kissed my forehead and felt my tiny fingers wrap round hers. And I imagine that she would bless me before handing me back to her daughter, and I would have made her glad, hopeful – in the miraculous way that babies do.

In the box there was this torn page, ripped from an album. No explanatory notes on the back. Why it was kept with the bundles of letters is unknowable. Nor do I know who took this photograph, with its careful label of ‘Mother’. It is not my own mother’s hand and Albert was killed two years previously. I have concluded that my grandfather titled his wife thus, for the family album. Here May Mabey stands, patient and steady in Spring sunshine. Is that cherry blossom in the back garden in Bitterne Park, Southampton? The war is over. The men have come home and her eldest son is not amongst them. All the letters that Albert would ever write are already in store.

Grandmother’s voice does not survive, for there is not a single letter from her hand. There is one birthday card, for Mum’s 21st, “from your loving Mother and Father”, that was written by my grandfather. When my mother moved to Sheffield in 1951, my father wrote, intermittently, for a period of three years.  Mum faithfully kept her love letters  but none from her parents.  I don’t suggest this was a deliberate act; I know Mum was living in Sheerness during the flood of 1953 and her lodgings were ruined. So perhaps those letters were washed away, sluiced off by the cold North sea.

Mum said that I reminded her of her own mother. I remember she would say our eyes were alike, “the shape of them, and the colour”, a shadowed green of still water and dark woods. I understand now the importance of naming those similarities, the subtle edges of inheritance, for recognition somehow hints that not everything has passed. I carried the echo of May Mabey whenever I looked up slowly, distracted from my absorption in drawing or reading (my usual occupations as a child), and Mum would say “You look a bit like my Mum you know.” Her voice was casual, mild, careful not to betray the sorrow felt – of this I am certain – at her sudden, unexpected death. My younger sister was barely two months old. My mother was 34. 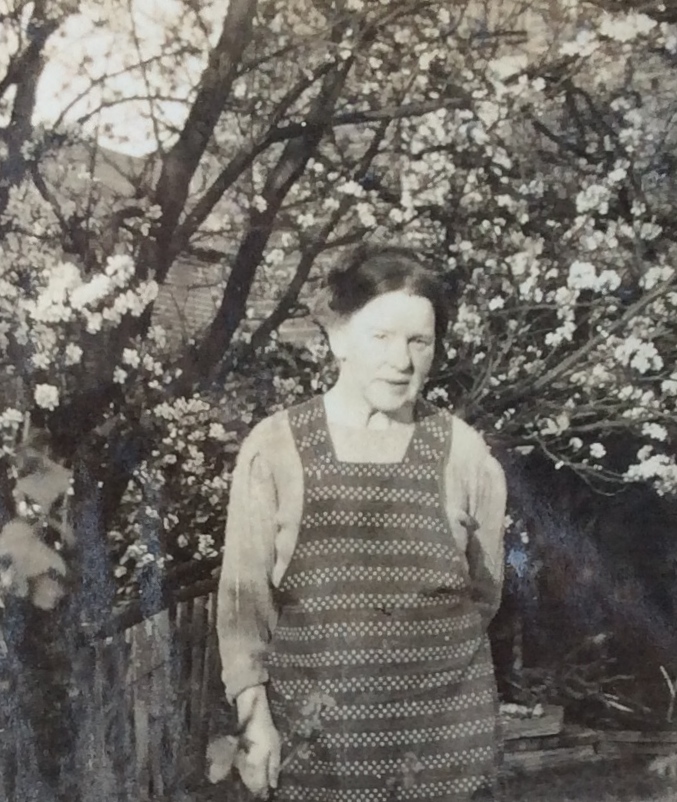