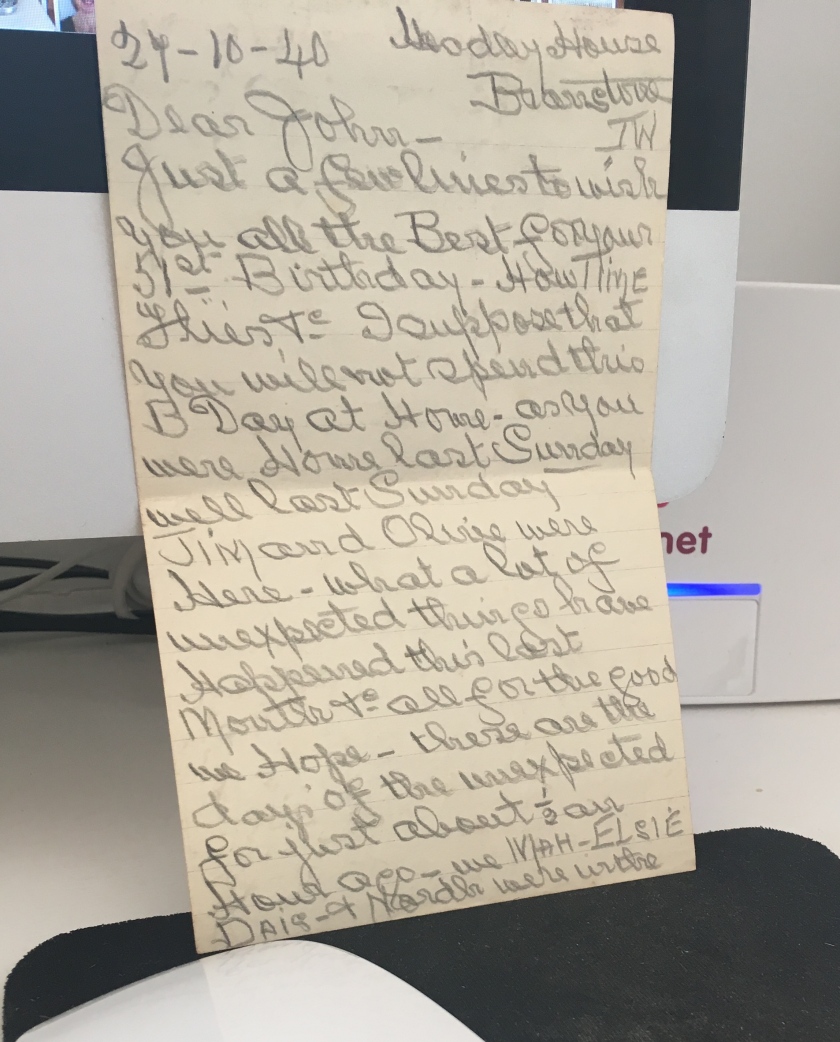 Just as I was about to start on Albert’s letters, Great-Grandfather makes another appearance! I found this letter from 1940 as I was collating Albert’s. Looking at the letter propped up against my computer, it seems to come from a different age. I suppose it does, for what did my Great-Grandfather, born in 1858, know of the trappings of my modern-day, connected world? I wonder what would he make of it all.

Great-Grandfather writes, as he did in October 1939, to wish Grandfather a happy 51st birthday. How different their lives are now, compared to the year before; Grandfather has been evacuated to Dorset with his school and bombs are falling on the Isle of Wight:

Dear John – just a few lines to wish you all the Best for your 51st Birthday. How Time Flies &co. I suppose that you will not spend this B’day at Home as you were Home last Sunday. Well last Sunday JIM and Olive were here. What a lot of unexpected things have happened this last Month &co – all for the good we hope. These are the days of the unexpected for just about half an hour ago, we – Mah, Elsie, Daisy and Norah were in the kitchen busy talking &co when all at once THE LAMP jumped – THE WINDOWS rattled and the house SHOOK &co and 5 Bombs dropped, seemed Quite Close. Caused quite a consternation but have no idea where they dropped possibly WINFORD WAY? Shall possibly hear about it Tommorow? So must leave it at that!!! But we must be thankful that we do not live in London – or any large TOWN &co. Well let us hope that by your next B’DAY THE HITLER GANG will have THEIR TEETH severely DRAWN &co. Well GoodBye Cheerio “OUR CHINS are Still up” DAD.

Wouldn’t the world have been very different, if Great-Grandfather’s hope had been realised and ‘The Hitler Gang’ were defeated within the year? Great-Grandfather seemed unaware that Southampton had already been attacked by Nazi bombers; 23 September 1940 is widely reported to have been the first night of The Blitz. Perhaps information was kept to a minimum. Southampton was very heavily bombed because it was a major port and the Spitfire factory was located at Woolston. A good account of Southampton’s Blitz can be found here The Blitz. As a naval base, Portsmouth was also targeted and often bombs were discharged on the Isle of Wight as  planes returned to Germany.

Periodically I ask myself, when sifting through my box of letters, why a particular letter was saved from the vast correspondence Grandfather received in his lifetime. In the case of this little letter the reason is clear, Great-Grandfather died in 1941. This was the last time he sent birthday wishes to his son.