I thought it would be easy to find her. Proud of myself for finding the burial records of All Saints’ Church online, I had noted the plot numbers of all the Mabeys buried there. So I thought it a straightforward task,  if a little melancholy, to visit them on the Sunday before I returned to the mainland. Optimistically I bought a bunch of flowers from Morrisons. By 2.30pm the selection was dispiriting (for this was Mothers’ Day) so my choice was limited to carnations or red roses. I chose the former. There were nine in the bunch, which would be enough for my plan.

Fine rain fell as I walked towards the church. I did not pass another soul on that quiet High Street. The cosy pub was full of families, the church door was open but no-one else walked as I did. Feeling like the motherless child that I am, I entered the churchyard, startling young rabbits grazing on the lawn.

The long graveyard, bisected by a narrow path extends far behind the church, seeming to vanish into woodland.  I walked across the flat square of green, from which the rabbits had scattered, to tread the mossy path, noting the metal row numbers on the low wall to the left. I cannot tell you why, but I was particularly intent on finding the graves of my two eldest great aunts. Edie and Elsie lie close by one another, although not side by side as Norah and Ursie do. Edie died aged 65 in 1949. She was the first of John and Jane’s children to live to an old age. Elsie passed away four years later, aged 67. She died in 1953, this was the year before my Mother married. They never knew us, their four great-nieces, so perhaps that was why I felt compelled to make my search.

They both started adult life ‘in service’ working for wealthy families on the mainland, Edie as a seamstress and maid, Elsie as a nanny. Neither grew rich, neither married. And I have no tokens of Edie at all, she never wrote a letter that was kept. All I know of her is what my Mother told me – she was the eldest, she had a son who was raised at Headley House, and she rarely returned home.

My Mother put these photographs side by side in her album. Of all the siblings Elsie is alone in having no studio photograph. We see her standing outside the front door of Headley House in  heavy, shapeless working clothes, an apple in her hand. It’s just a snap but someone (my Grandfather?) took the trouble to have it printed up as postcards. I wonder who she might have sent a copy to.

I have a few letters written by Elsie. They are kind and thoughtful, enjoyable to read. Elsie remembers to write to wish my Grandfather a happy birthday. Elsie remembers to send sympathies to my Grandmother on the anniversary of Albert’s birthday. She was so loved by Ann, whom she cared for as nanny, that she cared for Ann’s own children when they came along. As a young woman she left the Island for work, but she returned. I sense that she wanted to be in one place. Her occupation, as a nanny for clergy, took her to Aldershot, Farnham, London, Dorchester – distances vaster 90 years ago than they are now.

This postcard was sent in 1915, when Elsie was nanny to the Reverend Reginald Durrant. I think she sent it to reassure her mother that they had arrived safely, the unruly writing and ill-positioned stamp suggest a correspondence made in haste. In 1911 she had one charge (also called Reginald) to look after, most likely by 1915 there were more. 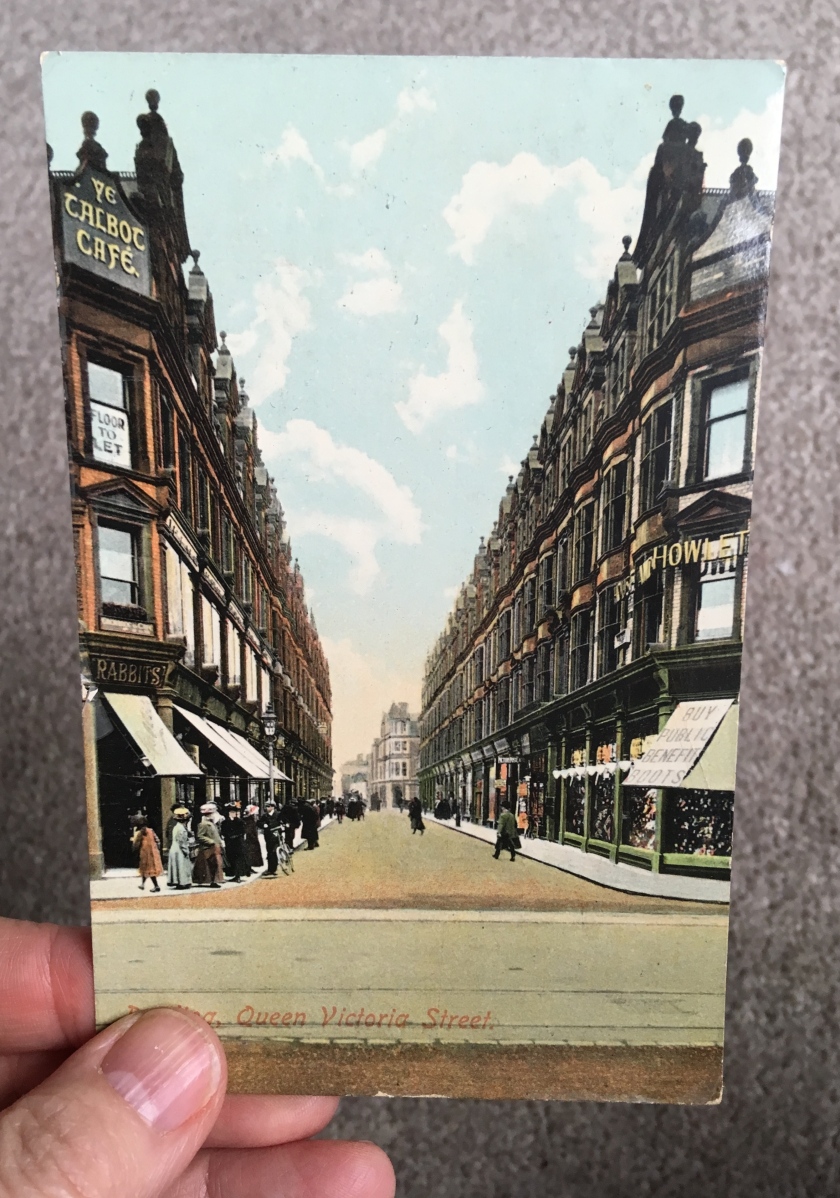 My quest to lay a flower on each of my ancestors’ graves proved futile. The row markers ran out. The neat rows of aged headstones gave way to mossy, sunken impressions of graves, their markers missing. Some of these anonymous graves had overgrown stone perimeters that I gingerly stepped across, cognisant that one of my Great Aunts might lie shuddering beneath. I asked two women who were tending a grave if they could help with the numbers but they were no wiser than I. Our voices sounded out enormous and incongruous in the gentle, still air of the Sunday Island.

Time ran out for me on Mothers’ Day,  I had a ferry to catch and the skies were darkening. Wishing that I had planned the enterprise better I marched back to my car, head bent against the rain. Clutching my white carnations I promised I would return and search  again for Elsie, and for our family.