One hundred and one years ago my Grandfather sent this card to my Grandmother. Three years later, in 1920, they married. Their marriage ended with my dear Grandfather’s death in 1963. ‘Dear Grandfather’ – a phrase I never thought to utter before I began to read The Letters. I regard that as a benefaction of the universe, that now I feel a connection to a man I never knew whilst he lived.

It seemed fitting to publish a love token on this Valentine’s Day, although I confess this is not a Valentine’s card, rather a birthday card sent on 21 May 1917.  The 14th February 1917 was not marked by any romantic sentiment in my Grandfather’s diary. There was the daily letter from May (my Grandmother to be), but no cards or flowers sent or received, and certainly nothing so extravagant as chocolates.

My Grandfather was a romantic man though, and he expressed his love ardently in the ‘billet doux’ that he slipped within this card. I will not share its contents for even a century later the lines beg privacy, which I must respect. He signs himself “H.H.”, terming himself a ‘Happy Headley’. My Grandparents  were betrothed by May 1917 but could not marry until my Grandfather had paid off certain debts on behalf of his family.

I will share that my Grandfather remarked that his illness kept him from crossing the Solent to visit May in Havant, and that he had to borrow money to send her the card pictured above. It is wonderfully detailed and well-preserved – crisply embossed and hand-stitched, with colouring so fresh I would have guessed it to be only a few years old. Clearly this card was kept close to my Grandmother’s heart. My mother wrote, in the red book on which the card is photographed, that her parents had a happy, harmonious marriage and that ‘they never bickered.’

Last week Lloyd’s letter, and the loss of him,  prevented me from recording it in detail. This week also I have not transcribed the contents of this card, but for a happy reason for there is no sadness here. These words have no need of my interpretation. All I shall remark upon is the feeling that I woke up with this morning, that I hold a token not only of love’s beginning but a marker of the ceaseless flow of love on this earth. I witness here the love that would bring my Mother into the world and, ultimately, started the story of me. 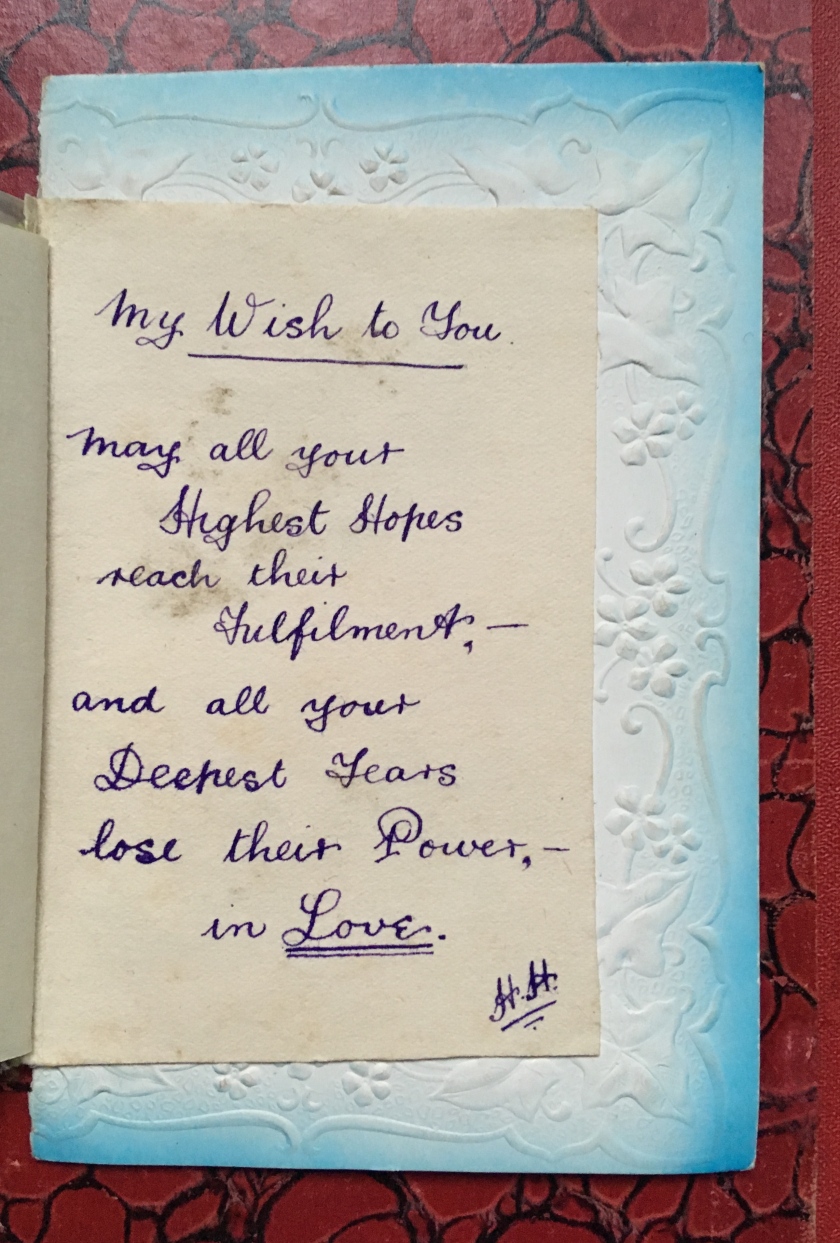